Find Floor Mats and Liners for your Wrangler

Item J102022
Close X
Enter Your Email to Save Products.
Saved to My List 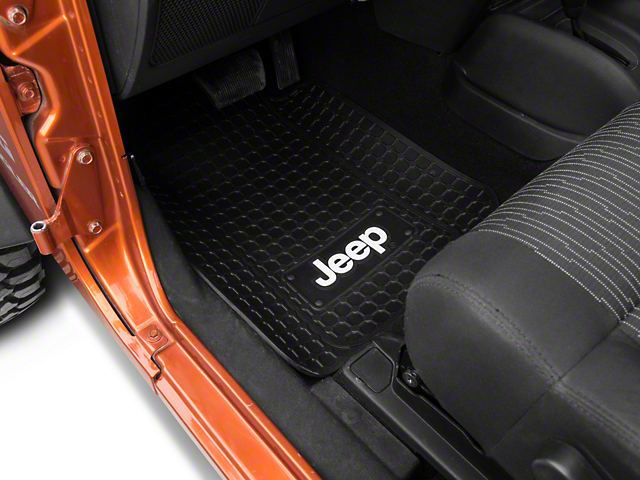 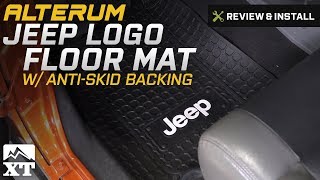 This Jeep logo floor mat with anti-skid backing is for those of you with a 1987 and up Wrangler that are looking for an inexpensive universal fit floor mat that has the Jeep logo on it. You'll often get a very high quality floor mat that won't have the Jeep logo on it, sometimes it'll have another brand's logo on it, and those floor mats are going to have retention, where it'll lock into the factory carpeting or at least nibs on the backside of it so it won't slide around. They're gonna have molded sides to catch any melting snow, any coffee spills, or just hold any dirt into the mat so that you can very easily remove the mat, hose it out, and reinstall it again. Those are going to be molded to fit and cover the entire floor-well area of wherever that particular floor mat is designed to be installed, whether it's front seat, back seat, or cargo area. This here is going to have the Jeep logo on it, which is something a lot of you are looking for, but it is again going to be a universal fit floor mat. So as you can see it's just a rectangular floor mat. You can set in anywhere, front seat, back seat, any location. However it's not going to have those molded sides, it's not going to have any sort of retention other than the anti-skid backing that's on this to keep it into place. So, what all of that means is this is gonna be less expensive than a lot of the other floor mats out there. However, it is going to be lacking a few of those features that the other floor mats have. These floor mats are going to be sold as a pair. You're going to get two of them for the price. And they're going to be made of this rubberized material with that anti-skid backing. And the anti-skid backing is more of a coating, it's more of a texture that's molded into the back of this floor mat than some of the other floor mats out there that, again, actually have a protrusion, have a nib that will stick out from the back of the mat to really lock into the carpet. These ones, they might work pretty well. If you do get some dirt underneath the floor mat, between the carpet and the floor mat, I think things are going to start sliding again. So the nibs are probably a better form of retention. And especially if you're gonna be putting this under your feet as the driver, you are most likely gonna wanna look for one of those floor mats that has a positive retention that actually clips directly into that factory carpeting or at the very least has those nibs to keep the floor mat from getting bunched up underneath your pedals. Now one of the big benefits to this floor mat is that it is officially licensed by Jeep. It does have the Jeep logo a couple of times on here. It's very prominent, which is something that a lot of you are gonna be looking for. This is going to be one of the simplest installs that you could ever do. Definitely a one outta three wrenches, under five minutes. Pull this out of the box, throw it in the Jeep wherever you want it. Again, these'll fit front seat, back seat, two-door, four-door, doesn't matter they're universal fit, and you're done. They may have a couple of wrinkles in them when you first take it out of the box, but once the Jeep sits in the heat for a little bit, you step on it a few times, it's gonna lay flat. So I said before that this is going to be a little bit less expensive than some of the other floor mats out there. It's not going to have as high of a side, it's not going to have the same retention, it's not going to be molded to fit specifically in one space or the other of your Jeep. This is definitely going to be universal fit. But, for those of you that are looking for a Jeep-branded floor mat that is going to be universal fit, that is going to save you a little bit of money, I think this is a great option. So if you're looking for an inexpensive Jeep-branded floor mat, I think this is going to be a good option for you, and you can find it right here at extremeterrain.com.

Jeep Pride. Give your Wrangler protection while showing off your Jeep pride with the Jeep Logo Front Floor Mats with Anti-Skid Backing. They feature stylish Jeep logos in white and rugged textures to assist in keeping spills and dirt off of your carpet. Cleaning these mats is hassle free using soap and water for a painless and easy to maintain stylish upgrade.

Durable Construction. These officially licensed front floor mats feature a rubberized vinyl construction for durability and continued use. They feature a nibbed, anti-skid underside to grip your Jeep's carpet and prevent sliding during travel.

Application. The Jeep Logo Front Floor Mats with Anti-Skid Backing feature a universal fit designed for use in 1966-2021 Jeep CJ and Wrangler models.