Find Snorkel Kits for your Wrangler 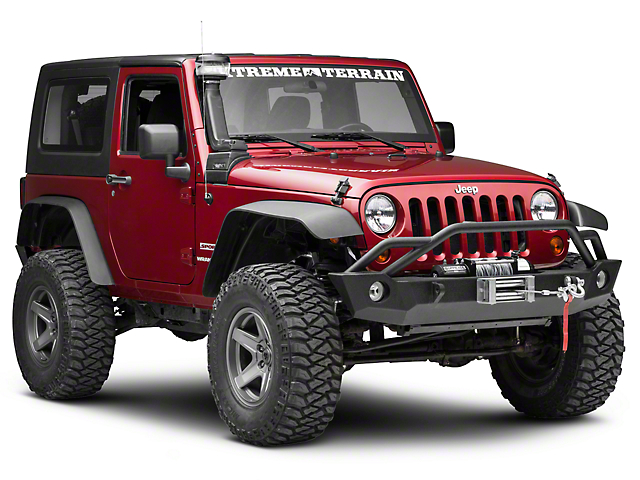 Intake. Rugged Ridge offers this XHD Snorkel Intake for the extreme off-roader. The air tubing is constructed out of mandrel bent aluminum for maximum air flow.

Filter Specs. This snorkel comes with a clear pre-filter, and you have the choice of two mounting options. The low mount option places the pre-filter just below the windshield. The high mount position raises the filter another 21 inches to put it at the top of the windshield. This system allows you to switch between the two setups easily.

Additional Features. Equipping your rig with a snorkel allows you and your Jeep to go through large mud puddles you could not otherwise wade through. The snorkel prevents the intake from taking in water and hydrolocking your engine. Rugged incorporated channels into this intake design to direct water away from the intake. The snorkel also reduces the stock filter's exposure to dust, grime and dirt to extend the life of your filter. Installing this snorkel requires slight modification of the stock fender. All hardware is included to complete the installation.

Application. This Rugged Ridge XHD Snorkel with Pre-Filter is designed to be used on the 2007-2018 Jeep Wrangler JK Models.

Reviews of Rugged Ridge Intake products have an average rating of 4.4 out of 5