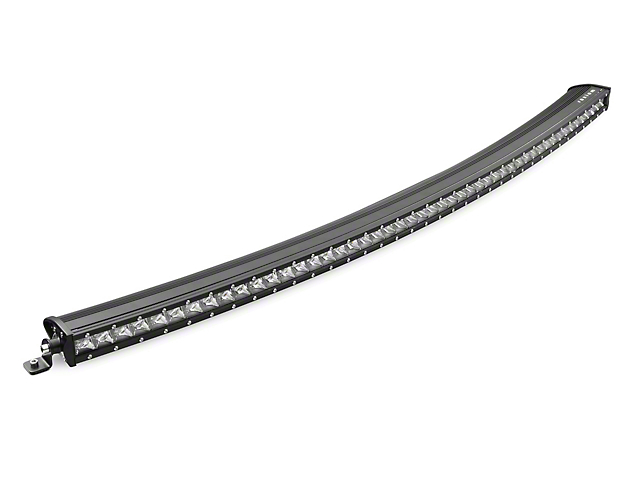 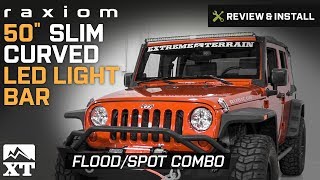 FREE Shipping
In Stock
Sorry, please enter a valid US or CA postal code
We're sorry, zip can't be updated at this time.
Choose options to add to cart.
Add to Cart
Save for later
Create a list
Add to New List

This Raxiom 50-inch Slim Curved LED Light Bar is for those of you that have a 1987 and up Wrangler and are looking for a 50-inch curved LED light bar, but aren't interested in the more chunky, more bulky dual-row LED light bars that are more traditional. This is going to be a slimmer look, in my opinion, it's a much more sleek look. If I was going to install a 50-inch light bar on my Jeep, it would definitely be a slim version. So for the installation of this light bar, I'm gonna go with a two out of three wrenches because of the wiring that is involved. Now, because this is a single-row light bar, as opposed to the double-row light bars that you might be used to seeing, it has roughly half the number of LEDs. These LEDs are going to a bigger LED, so they're gonna put out a little bit more light than the smaller ones of the dual row. However, it's probably not going to be equivalent to the same amount of light output that you would get from one of those double-row LED light bars. If we're being honest with ourselves, a lot of us don't need the light that one of those double-row LED light bars puts out. It's just a ton of light that's going to be used in a fairly small number of scenarios where you'll actually need that much light that far down in front of you. This is still going to produce a ton of light, still going to be very useful, and in my opinion, aesthetically it looks a lot better on the vehicle. Now Raxiom, in general, is known for making a high-quality light bar that's going to be a little bit more affordably priced than some of the premium brands out there. You can find a light bar that is three, four times as much as this one costs. And, on the flip side of that, you can find some that are going to be a quarter of what this one costs and they're gonna come with a wiring harness and a mounting bracket for you. With Raxiom though, I think that you're going to get a really nice mix of both quality and value. This light bar is going to have a die-cast aluminum housing with a polycarbonate lens over the top of it. This does come with a pair of feet that you can use for mounting it, but the vast majority of you are going to wanna purchase a 50-inch LED light bar mount for your Jeep specifically so that you can mount this without the need to drill into your windshield frame. This light bar does have a two-wire pigtail that comes on it, which is very traditional for a lot of 50-inch light bars and even smaller light bars so you are going to have to do some wiring to get this set up and actually working. So, for the installation of this light bar, I'm gonna go with a two out of three wrenches because of the wiring that is involved. If you purchase one of those bolt-on 50-inch light bar brackets for your Jeep, getting the bar itself mounted onto the Jeep is going to be a half hour process, very, very simple, not difficult at all. However, once you do that, then you do have to get this thing powered. And if you're building your own wiring harness, you're going to need a switch, a fuse, a relay, of course all the wiring, and it is going to be a bit of an involved process. If you have some comfort level with automotive wiring, but you don't wanna build your own wiring harness, Raxiom does make an LED light wiring harness that you can purchase that will make getting this wired much, much easier. And if you have zero level of comfort with automotive wiring, you don't wanna get involved, it's perfectly okay to take your Jeep to a shop and have it installed. This bar comes in at right around $375 and like I said before, I do think that's a really nice mix of both quality and value. You can spend a ton more if you need the top of the top, you want every bit of light that you can get, every lumen, every foot of throw that you can possibly get, then one of the premium light bars is going to be the place to look, but you are going to have to spend significantly more. And in my opinion, I wouldn't wanna go with a light bar that costs a third of what this one costs, because the chances of having issues with the LEDs burning out, with getting condensation behind the lens, with just the light bulb rusting in general, are much higher with a very, very bargain basement priced light bar. So again, I think that this one is affordably priced for what you're getting, I think it is a good amount of value for the cost. So if you're looking for a slim curved LED light bar, I definitely recommend taking a further look into this one from Raxiom, that you can find right here at extremeterrain.com.

View Full Transcript
Compact and Brighter. Are you looking for a smaller, sleek, low-key light bar but still want impressive nighttime performance in a durable unit? Look no further than the Raxiom 50" Slim Curved LED Light Bar with Flood/Spot Combo. This light bar offers you the radiance and longevity needed in the form-factor package you want.

Excellent Lighting. The mighty CREE LEDs packed into this curved light bar push out a remarkable display of bright white light in a spot and flood beam combo with a color temperature of 6000K and operating voltage of 10-30V DC. The dual row has 100 high-intensity LEDs that will clearly light up the trails. With this curved bar, you'll get plenty of trail heading light in a less obtrusive package.

Rugged Construction. The Raxiom 50" Light Bar is built to perform in harsh conditions and features a die-cast aluminum housing for strength and rigidity, while its polycarbonate lens easily takes hits and bumps from trail debris and over hanging branches without cracking or shattering. The whole light bar is sealed and earns an IP 67 waterproof rating, so you know you can tackle the trail in the worst weather.

Application. The Raxiom 50" Slim Curved Light Bar with Flood Spot Combo comes with CREE LEDs and fits all Jeep Wrangler models with the appropriate windshield mount, which is sold separately.

Any issues with going thru drive thru car washes with this light bar installed? PreThanx!

What is the lumen output and wattage?

Hello- What light bar mount would you recommend for the slim curved light bar by Raxiom? Because it is curved, is there a specific choice?

If we have the JL AUX, can we hook this up to the 15amp or should we go with the 40amp?

To piggyback the last question. What exactly is properly adjusted? Mine has 3 distinct noise issues. A harmonic noise, whistles and a deeper noise that sounds like wind turbulence at 60mph.

Does this light bar whistle or make other obnoxious noises like some others? I'd like to know if you've tried it out on a newer JKU. 1 answer
Helpful (0) Thanks for your input!

3.4 out of 5 overall rating from 5 customers 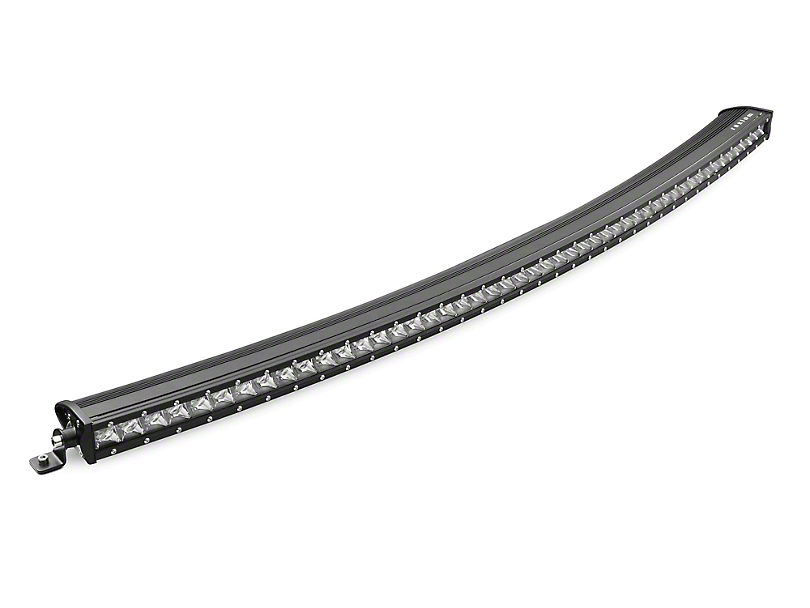 This is the 3rd time I have ordered and each time very satisfied with the experience, shipping, and the quality of the parts