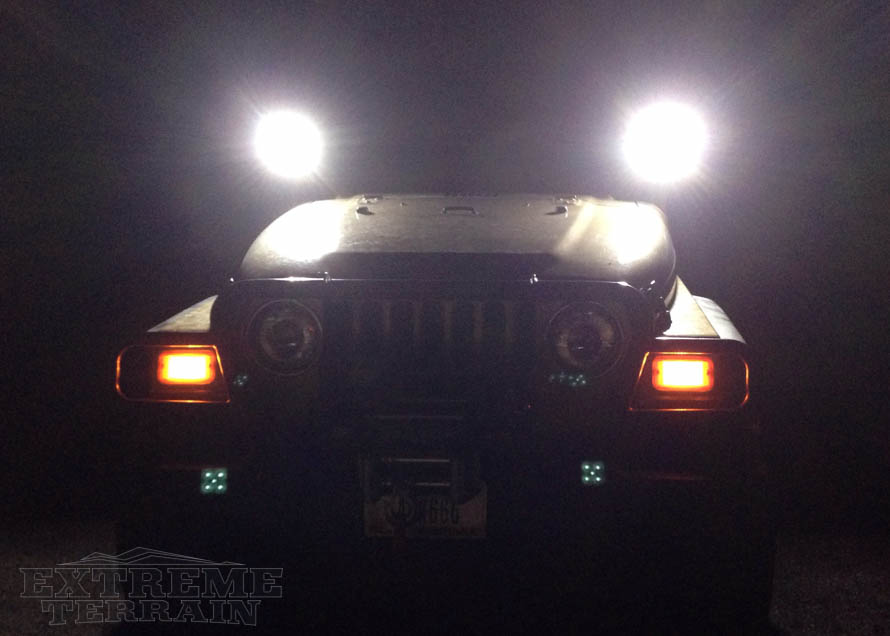 Whether you plan to upgrade your headlights or simply add some off-road lights, you have a couple of options. Halogen, LED, and HID are the most popular options for Wranglers. Unfortunately, Wranglers probably won’t be getting laser headlights anytime soon but there are still several options available. Each Style of light has benefits and drawbacks compared to the others.

Check out the collection of Jeep Wrangler Off-Road lights offered at ExtremeTerrain.

Popular in automotive applications for a long time, the incandescent halogen light bulbs that you see in most vehicles is a very simple and inexpensive technology. These lights operate by moving an electrical current through a filament that is contained in a bulb and has halogen gas trapped inside. The filament glows when it becomes hot from the electricity flowing through it and the halogen gas redeposits the filament material back onto itself allowing it to last longer and operate at higher temperatures. The problem with these lights is that they are not very efficient, they draw a large amount of current and converts most of it into heat.

Light emitting diodes or LEDs for short, are becoming more and more popular for both on and off-road uses. The biggest benefits to LEDs is that they have insanely long lifespans unlike halogen and that they are much more efficient than both halogen and HID lights. Led lights are very bright but don’t have a very long range, this makes them great for use as flood light for off-roading. One of the issues with LED lights is that they aren’t able to get the same range as halogen and HID. 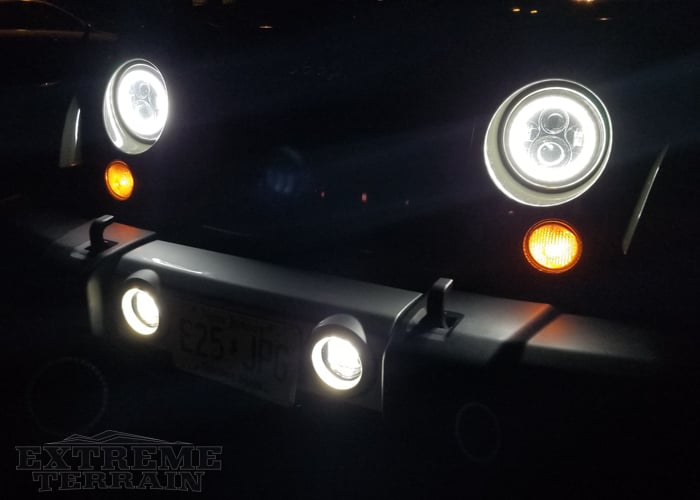 Also commonly referred to as xenon lights, HID stands for High Intensity Discharge, referring to how these lights operate. The reason these lights are also called xenon lights is because they use xenon gas in the mixture of gases inside of these lights. This type of light uses low voltage, high current, electricity that arcs across tungsten electrodes through a mixture of gases producing light. HID Jeep lights are usually the brightest and have the best range of the three, however if they are improperly set up they can create a distracting glare for other drivers. They are more efficient and vibration resistant than halogen but less so than LEDS.

The factory lighting on a Jeep is notoriously bad, couple with the fact that most trails have little to no lighting, makes the need for aftermarket lighting critical. Headlights are often the easiest lighting upgrade you can do. Often requiring, just the removal of the front grill and retainer ring. Jeep headlights can often be replaced within an hour and offer a tremendous improvement in overall lighting.

Jeep fog lights can be more of a challenge, depending on the proposed location. If you plan on replacing the factory fog lights, located in the front bumper, it will require the removal of the bumper and possibly wiring adapters or splicing of the factory harness.

Additional spot or accessory lighting can be added in a variety of locations on the Jeep, each requiring their unique level of installation and issues. Any additional level of lighting will also require wiring that is properly fused and switches within the cabin to control the light sources. This process can be simple or extremely complicated, depending largely on the level of lighting you would like to do. Aftermarket power control units can offer a centralized location for all the wiring and provide a single source of switch control inside the Jeep, making the installation easier, cleaner and more versatile. As with any electrical component, it’s important to maintain the integrity of the factory wiring and avoid unnecessary splicing whenever possible.