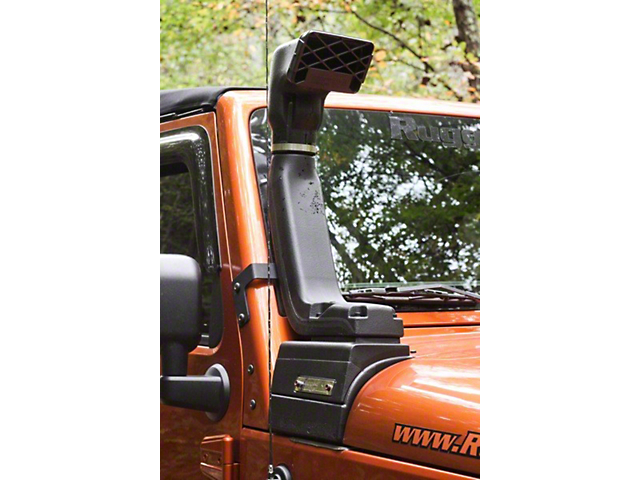 Function. The Rugged Ridge XHD Low/High Mount Snorkel Kit relocates the stock air intake location and features manual drain valves to prevent hydro-locking of the engine while underwater. It also reduces dust-clogged filters and draws in cool air into the hot engine compartment. The Jeep Wrangler Snorkel Kit comes with Pre-filter Low Mount that relocates the air intake to just below the windshield. The optional Ram High Mount lets you extend the air intake by an addition 21 inches above the windshield.

Flexibility. It gives you the flexibility to fold the windshield and remove the doors as and when you need. This Jeep accessory can be used with dual battery tray and windshield light bar and windshield light mounting tabs to let you safely cross the river. You can interchange between the Pre-filter Low Mount and Ram High Mount to suit your situation.

Installation. You can easily set up this Jeep accessory with minor alteration to the fender of your vehicle. It comes with a lower air cleaner box that can install in place of the factory unit. You can choose between a high-mount ram design or the standard low-mount intake.

Application. The Rugged Ridge XHD Low/High Mount Snorkel Kit is designed for use on the 2012-2018 Jeep Wrangler JK models equipped with the 3.6L engine.

Does the high mount for this product fit with a 50" windshield light bar (not from rugged ridge/not a tub design)? it looks like there are some pictures of it working, but I cannot tell if snorkel is being bent forward by the front of the light bar. Also if the ram high mount works with the light bar, does the pre-filter high mount also work?

What cold air intakes will work with this snorkel, if any?

Does this use an OEM air filter? I just purchased a KN air filter

Will this fit with Rugged Ridge Hurricane Flat Fenders? 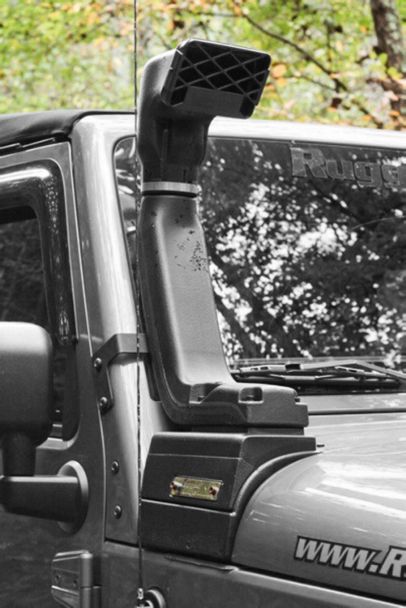