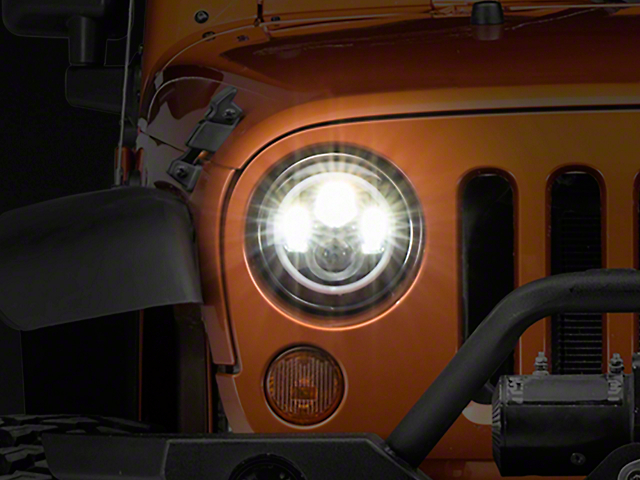 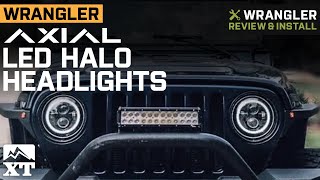 Style and Function. Upgrade the appearance and visibility of your 1997-2018 Jeep Wrangler with a set of Axial LED Halo Headlights. These Axial Headlights feature a great looking integrated dual function accent halo. The halo functions as both a Day Time Running Light (DRL) and as a Turn Signal Indicator. The halo glows white as a DRL and amber when active as a turn signal. These Axial LED Headlights will certainly be much brighter than your stock headlights and feature a 6000K cool white color temperature.

Superior LED Lighting. Featuring premium high output LEDs, these Axial Headlights out put 5400 lumens for the High Beams and 3600 lumens for the Low Beams. With a 60% lower power consumption than standard headlights, these LED Lights have a life span of up to 50,000 hours.

Durable Construction. Designed to perform in the harshest of elements, these Axial Headlights feature a rugged housing with a tough as nails clear polycarbonate lens. Each Headlight is epoxy sealed to prevent moisture from harming the state of the art electronics found inside. These Axial LED Headlights can take just about anything the trail can throw at them.

Easy Installation. Axial 7" Halo LED Headlights were engineered to be a direct plug and play replacement for your Wrangler's original stock lights. With the included H4 - H13 wiring harness adapters (needed for 2007+ models) installation can be completed in under 30 minutes. It should be noted that the DRL/Turn Signal halo light will require additional wiring for operation. Installation instructions are included.

Application. These Axial 7" LED Halo Headlights with DRL and Amber Turn Signals are designed to fit 1997-2018 Jeep Wrangler TJ and JK models. Driver and passenger side lights are included.