In the off-roading community changing out your ring and pinion is a common topic of discussion. Ring and pinions alter where in the RPM band your Tacoma makes power. Not a power adding mod per say, but they can compensate for larger tire and wheel combos or extend your top speed.

Working with an off-road build for a Tacoma means many mods will be made, including modifications to the ring and pinion in the differential. Lower ring gears are highly desirable for restoring lost power and increasing traction when the truck is fully dressed for the occasion. 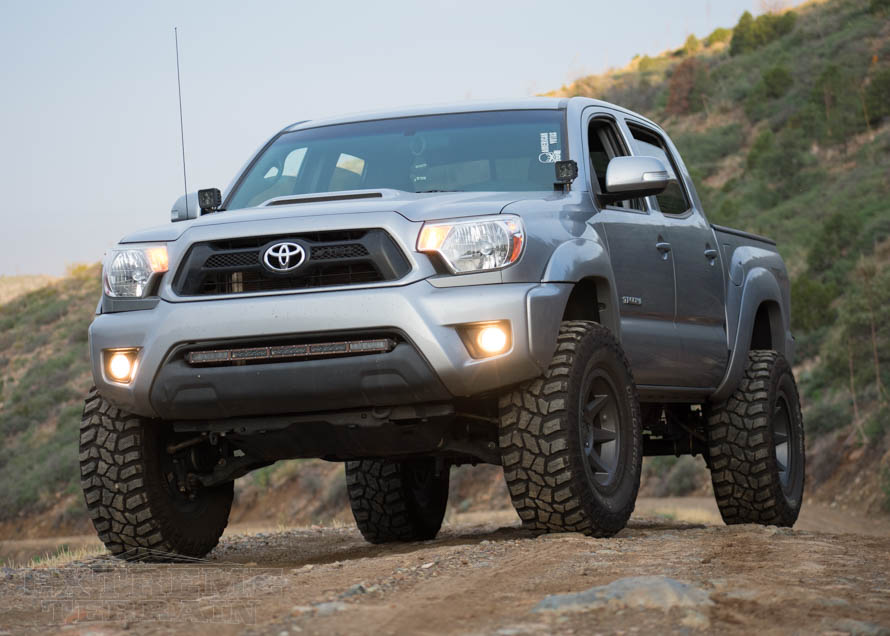 The ring and pinion live within the differential of the Tacoma. This gear ratio is often referred to as the final drive. The pinion is spun by the driveshaft. The pinion then turns the ring gear which in turn spins the tires.

The ring and pinion are responsible for turning the tires in relation to the transmission. The gear ratio is a measurement of how many times the driveshaft needs to turn in order to spin the tires. A typical measurement is 4.10:1.

With this measurement, the driveshaft has to spin 4.10 times to spin the tires one revolution. Moving to a lower gear ratio is done to increase traction and throttle response. A lower gear is measured with a higher numerical value.

When you are experiencing a loss in throttle response due to larger tires, additional weight, or are looking to improve traction, you need to find out what your factory gear ratio is. This will give you a baseline to start with and help you figure out what gear ratio you need to move to.

Tacomas come with a variety of ring gears fitted to the differentials and you will need to check your truck to figure out exactly what you have. Below are typical ring gear ratios found in Tacomas.

Why Alter the Gear Ratio

Increasing throttle response and traction is an obvious reason to swap out your ring and pinion out for a lower gear ratio. When larger tires or heavy mods have been installed the truck can become very sluggish. The Tacoma will look really cool but will become a total dog in terms of performance. Many who build their truck up for off-road will swap the ring gear out for a lower ratio because of the fact that it will simply help the truck perform as it did in stock form.

Bigger Tires: Tires work much like a gear does and the size of the tires on the Tacoma will impact throttle response and top speed. Taller tires take more effort to turn and will make the ring gear feel like a higher ratio and throttle response suffers. By moving to a lower gear ratio, throttle response is restored.

Overlander: Overlanding Tacoma’s are loaded up with a lot of equipment and sent down trails where they will be struggling for traction. Even if this form of off-roading isn’t as extreme as others, the experience will benefit with the use of lower gear ratios. You will want a gear ratio that will help the truck get up to speed when fully loaded on loose terrain, but you don’t need to go extremely low as you will likely use the truck on the street as well.

Rock Crawler: Rock Crawlers need total control. In a tight situation, a tire may only need to move a fraction of an inch to get the operator in the position they need to be in next. Many rock crawlers will reach for extremely low gear ratios because they can use lower RPMs to their advantage. These super low gear ratios are terrible for streetability though, and one needs to think about this before putting them on a truck they’d ever consider using on the street.

Mudding: Mud trucks also use super low gear ratios but this is because they use higher RPMs to their advantage in order to keep the tires spinning. If you are building your Tacoma to sling mud like crazy, you will need much lower ring gears than the factory equipment.

Fuel Economy: It sounds a bit outlandish that increased throttle response would help with fuel economy but when you boil it down it makes sense. With lower gears, the engine doesn’t have to work as hard to get the truck up to speed. If you go too low, it can have the opposite effect. If you’re looking to increase fuel economy after bigger tires and heavy mods are installed you only need to go to a slightly lower gear ratio.

Installation of ring and pinion gears is a time consuming job that requires specialty tools. It can be taken on at home but one should process the task with a level of attention a professional would implore. The truck will need to be lifted, axles pulled out and the carrier will need to be removed. Torque wrenches and precision measurement tools are a must.

Professional Work: There is no shame in calling for professional help when installing a ring and pinion. This is the kind of job that needs to be done carefully to ensure perfection. One slight error can result in premature wearing of the gears and potential destruction of the differential.