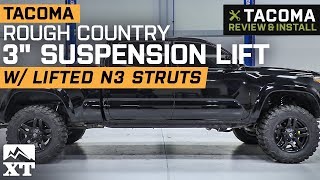 Delivers Superior Lift Solution. The Rough Country 3 inch Suspension Lift Kit with Lifted N3 Struts is designed to improve the Tacoma’s looks and off-road capabilities. Not only does it provide a level stance, it allows for mounting larger tires. Additionally, it comes with a set of premium lifted N3 struts for excellent performance on and off-road.

Billet Aluminum Strut Spacers and Fabricated Rear Blocks. The kit’s strut spacers and lift blocks are precision-made from high-grade materials. Not only do they provide a precise, level stance – they’re tough and durable for long-lasting service.

All Bolt-On Installation. This 3 inch Suspension Lift Kit with Lifted N3 Struts is quite straightforward to install and requires no drilling or welding. Note that after installation the Tacoma must be aligned to factory specification.

Backed by 3-Year Limited Warranty. The Lifted N3 Struts are backed by a 3-year limited warranty. All other hard suspension components are backed by Rough Country’s Limited Lifetime Replacement warranty.

5.0 out of 5 overall rating from 5 customers

You mention that it will lift 3" in the front and 2" in the back. Will the truck be level is my question. I want it to be level. I have a 2019 Tacoma off road. Thanks CG

What other parts will I need? And relocators or drops necessary?

Helpful (5) Thanks for your input!

Can this be used on a trd package Tacoma ?

Does this kit include differential spacers? Thanks.

I have a 2007 tacoma trd access cab 4x4 if I raise it 3" in front will I have to buy new uca or any other suspension parts? 0 answer
Do I need to have the 2 inch lift block for the rear if I have the Old Man Emu EL095R leaf springs on my 2012 Tacoma 4x4 double cab? 0 answer
Is there a version of this kit with coil springs already installed? Is there an equivalent version if this kit that is 4inches front 3 in back? 0 answer
So this setup doesn’t work for my 2019 2wd trd sport? 0 answer
I have a 3rd generation 2019 tacoma trd sport 4x4 4 door short bed. Your kit says it gives 3 inches of lift in the front 2 in the rear. My question is, since the 3rd gen's have a 1 inch lift from the factory, will this kit give an additional 3 inches in front and 2 in the rear (I am assuming a net lift of 4 inches front, 3 inches rear of lift overall) or does the 3 inches and 2 inches include that factory 1 inch lift? 1 answer
Helpful (0) Thanks for your input!
In the video you mention that there is a slight trade off from daily drivability and off road performance, are you talking about gas mileage or just the way the truck feels after having the suspension changed? I have a 2012 off road tacoma 1 answer
Helpful (0) Thanks for your input!
Will I have to change the upper control arms? I have a 2010 Tacoma 1 answer
Helpful (0) Thanks for your input!
So this lift will allow 285/75/16 (32.8") tires with no other modifications or metal cutting? 0 answer
Can I run 33" tires with this setup or will I need to add or trim anything? 0 answer
Are the differential spacers necessary on a 2 wheel drive? 1 answer
Helpful (0) Thanks for your input!

It is not compatible with T/X Baja or XSP-X Models.