Most Popular in Wrangler Driveshafts

When Should I Upgrade My Wrangler's Driveshaft? Plus Two-Door & Four-Door Advice 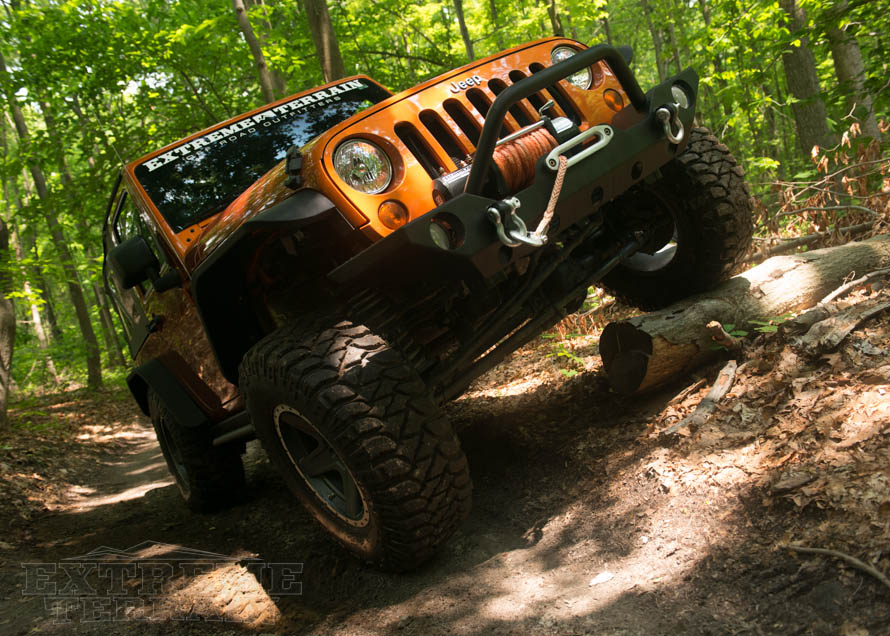 Your Wrangler's driveshaft keeps your tires rolling, and the power moving. Snapping a driveshaft while on the trail is the worst; no way to even limp your rig home! If you're an off-roader, an aftermarket driveshaft will serve you well.

How a Driveshaft Functions

Your Wrangler’s driveshaft performs a crucial function in moving power from your engine to the wheels and transferring torque to the differential from the transfer case. Torque is the strength of your Jeep's engine (its ability to do work. A distinction from the horsepower, the speed at which work is done). A driveshaft transmits that raw power to the differential, where it can actually spin the wheels, moves your vehicle, and lets it do everything from skimming along a highway to surging out of mud hole on the trail.

Knowing when to upgrade your Wrangler's driveshaft is critically important because running the wrong shaft can easily result in breakage which stops your Jeep dead (potentially with disastrous results in traffic). An inadequate driveshaft can break some time after the stress has been applied too, Material fatigue adds up during wheeling, causing fractures that later prompt the shaft to snap even under light driving loads.

As a rule of thumb, a Wrangler driveshaft upgrade is very often required after any significant suspension lift or power increase is installed. Let's look at some of the specific situations that signal it's time to get an improved aftermarket driveshaft.

When to Upgrade a Wrangler's Driveshaft

The stock driveshaft is designed to match the suspension travel of the factory suspension. It is also not too tough (just enough for average driving and fairly mild off-roading) and lacks grease fittings due to cost cutting during the engineering process. Times to upgrade your Jeep's driveshaft include:

The Significance of an Aftermarket Driveshaft with Suspension Lifts

Installation of a Wrangler lift kit is the premier reason for also swapping out the stock part for an upgraded driveshaft. The driveshaft lengthens when the suspension stretches – that is, when the axles and wheels move downward away from the body – and shortens when the suspension gets compressed. The stock driveshaft simply isn't long enough to lengthen sufficiently when the wheels flex downward with 2 inches, 3 inches, 6 inches, or whatever additional travel the lift kit allows. Upgraded aftermarket shafts, however, are made to match the extra length. 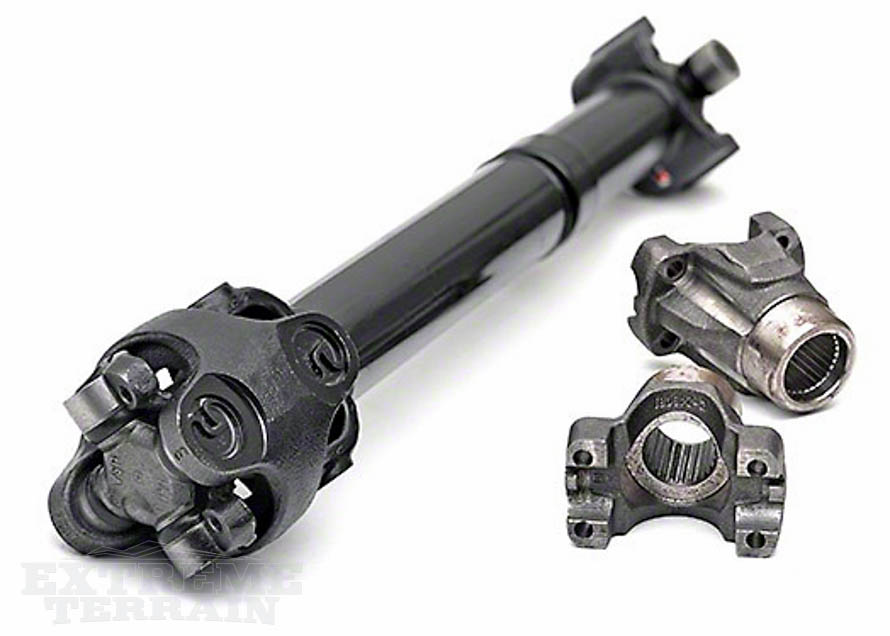 Typically, stock Wrangler driveshafts have no grease fittings. This means there is no way to slow down wear, or to expel grit from the interior workings of the joints after wheeling in dusty, muddy, or sandy conditions.

When you go wheeling frequently in gritty, dirty situations (often the places where the most fun and adventure is to be had), this is another occasion when a driveshaft upgrade will probably serve your Wrangler well. This applies even if you have not yet installed a suspension lift:

So What's the Difference Between Two-Door & Four-Door JKs?

A two door JK Wrangler has a wheel base of 95.4” opposed to a four door that has a wheel base of 116”. Those extra 20.6” of wheel base have a dramatic impact when it comes to stance, handling, lift modification, and most importantly, driveshafts. The front half of the Jeep is the same between both models, therefore the length of the front drive shaft and angles when the Jeep is lifted are all the same. The difference is noticeable in the rear half of the Jeep as the rear axle of a four door sits further back. As a result, it uses a longer drive shaft. Considering Wranglers are primarily a rear wheel drive vehicle, this has a tremendous impact if you decide to lift your Jeep. The angle created for this rear drive shaft changes drastically between two door and four door models and requires replacement at different stages. 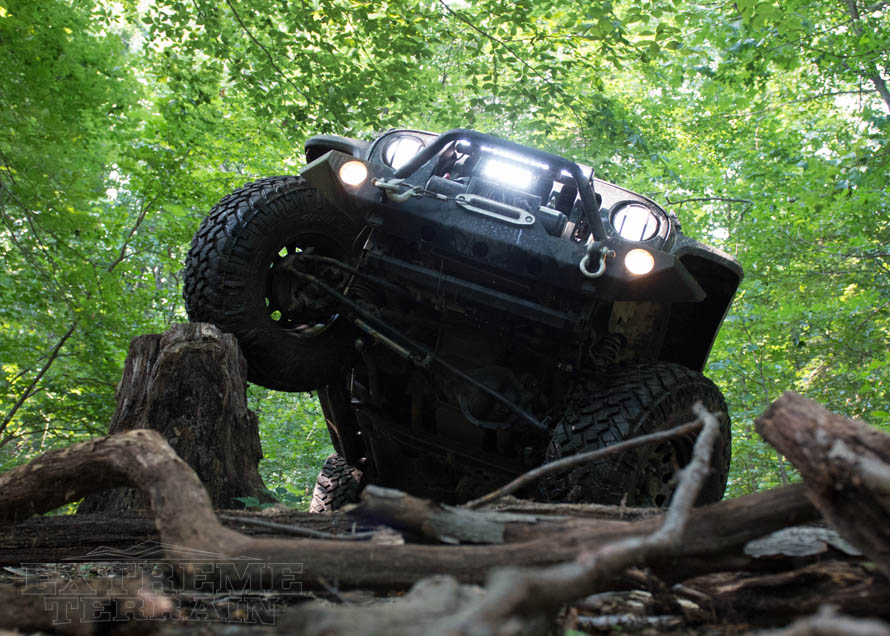 Can Modifying My Suspension Help My Driveshaft?

One way to correct suspension geometry is to correct axle position with new control arms. Control arms push the axles out in an effort to re-center them within the wheel well. But this introduces another stress point for the stock drive shafts as the axles are pushed further out. The drive shafts need to be longer. Under nominal lift heights ranging from 1.5”–3” there isn’t a noticeable impact in the positioning of the axles. Under those cases, either a top or bottom set of control arms is enough to push the axles back slightly, but more importantly correcting their angle. This then brings the drive shafts inline and alleviates any stress on the joints. It’s important to note the stress along the length of the shaft should still be monitored. 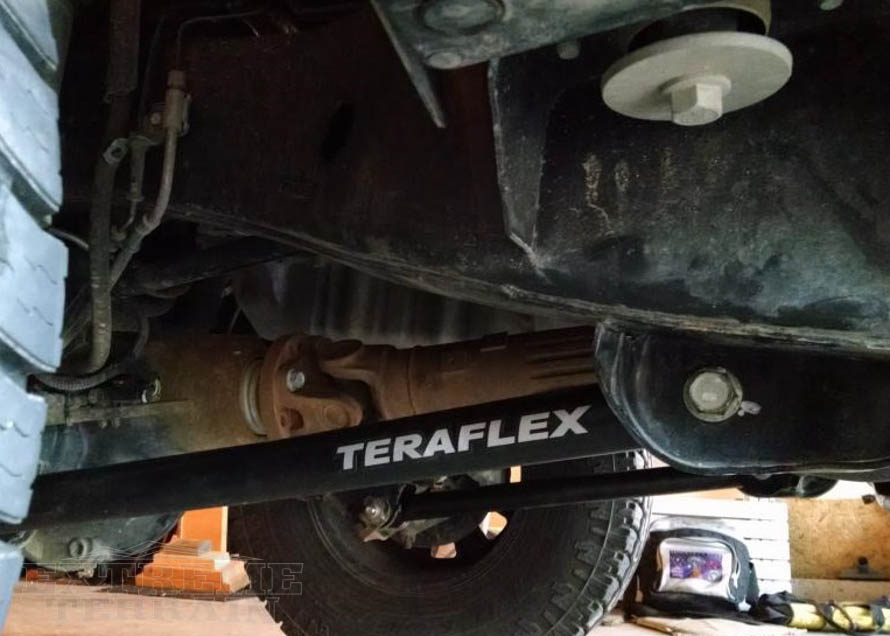 What Size Lift Can I Safely Run on My JK? Two-Door & Four-Door

As stated earlier, the front drive shafts are the same between the two and four door models. When lifted, the angle they create is the same. As a result, a good rule of thumb is to maintain within a 2.5”-3” lift range for the front. Remember, Wrangler models 2012 have the potential of rubbing against the exhaust that crosses under the drive shaft. You’ll need the spacer mentioned above to preserve your driveshaft. It’s important to note lift height estimates are based on a fully loaded Jeep. This means a Jeep equipped with steel front and rear bumpers, winch, and skid plates. Since the bulk of additional weight is largely concentrated in the front, the Jeep tends to have a bit of a rake. You can counter the rake look with different spring rates between the front and rear.

The rear drive shaft introduces a difference between the two and four door models. In four door models, the rear drive shaft is longer and able to accommodate a higher lift amount, generally 3.5”–4” of lift. For a two door wrangler the maximum lift should be 2.5”–3”, similar to the front. Again, these lift estimates are based on a fully loaded Jeep. The reason for the difference is due to the length of the drive shaft. On two door models a shorter drive shaft produces more of an angle than a four door with the same lift height. This greater angle has the potential of contact and joint/boot damage while driving or out on the trail.

If you plan on taking your Wrangler off-road, the problem of angles and contact increase greatly, especially if you do a considerable amount of articulation. Large drops or compressions flex the wheelbase and put a big strain in the joints of the drive shaft and substantial angles can cause serious damage to the drive shaft or drive train. 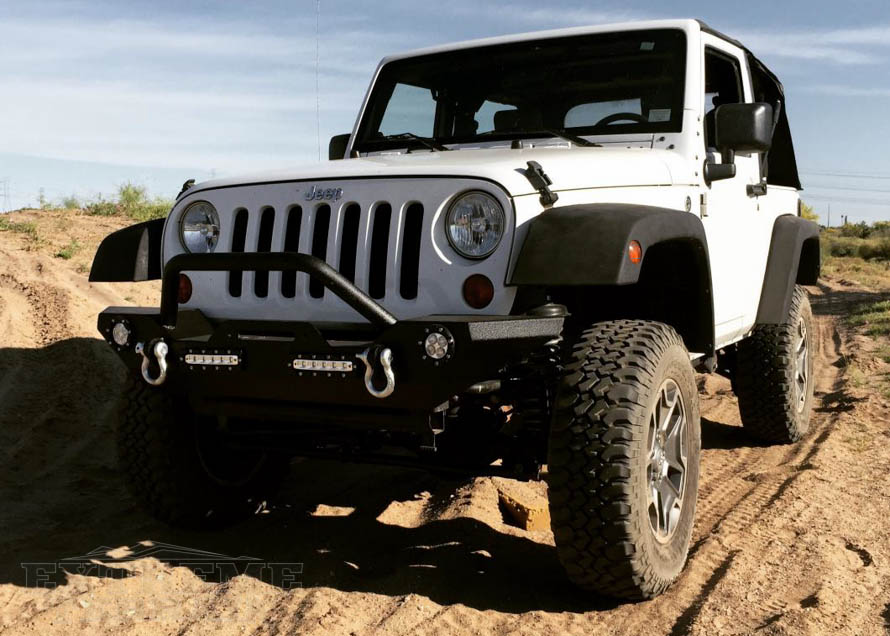