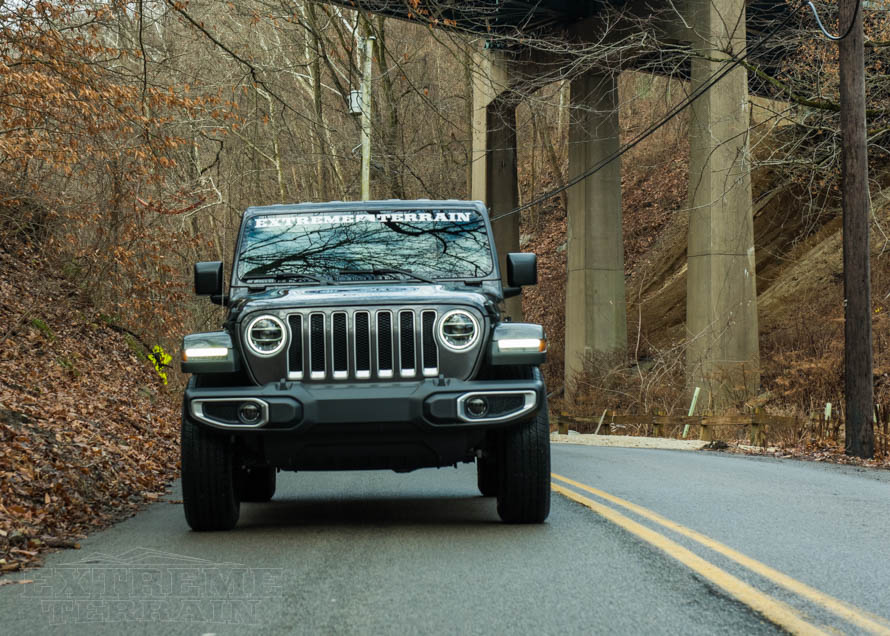 Talking about a Jeep Wrangler and fuel economy is a bit like going into a specialty steakhouse and asking for their best chicken dish. Sure, they might have one (or be able to whip one up) but it certainly is not something their business is vested upon (can you imagine the response Gordon Ramsay might give for attempting such an order?). Most people that are interested in a Wrangler aren’t too concerned about fuel efficiency because the fact of the matter is, fuel efficiency, due to a variety of factors, is just not a focal point. That said, there are some tips and tricks owners can apply to shave a few dollars off their yearly fuel bill.

Tuning your Wrangler's engine usually only happens with you need a speedometer correction from bigger wheels and tires (the replacement for speedometer gears for those of us with older generation Jeeps). However, you can also use a tuner to compensate for power adding mods or for simply rewriting the stock fuel maps for better MPGs. Generally the more expensive the tuner, the more parameters it can change.

When the first-gen Jeep Wrangler YJ was made available for public purchase, the model equipped with 4.2L AMC inline-six motor, a five-speed manual, and all-wheel drive could muster 14 city/18 highway miles per gallon. The four-cylinder motor delivers slightly better numbers at 17/18 mpg. None of these numbers are particularly amazing, considering the engines – all made by AMC at the time – only produced between 112-180 horsepower.

The second-gen Jeep Wrangler TJ with the 120-horsepower four-banger and five-speed manual saw an uptick in efficiency power numbers to achieve 16/19 mpg. The now-renown 4.0L inline-six saw many smaller revisions to the cylinder head, intake manifold, and exhaust manifold in order to bump peak horsepower and torque 190 and 225 lb-ft, respectively, whilst maintaining the same fuel economy ratings of 14 mpg city and 17 mpg highway.

The third-gen Jeep Wrangler JK entered production in 2007. This model is available with a more powerful 147-horsepower 2.4-liter four-cylinder engine. Combined with a new six-speed manual transmission, it is rated at 16/19 mpg. The extra gear is necessary to extend the highway range of the Wrangler JK.

The 4.0L AMC-based inline-six engine no longer available, Wrangler JK received the new 3.8L V6 engines that produce more power and torque. However, this move was not primarily intended to improve the fuel economy of the vehicle, but rather to compensate for the added weight. The 2007 Jeep Wrangler TJ Unlimited tips the scales at 4300-pounds, which is about 1,000-pounds more than the 2006 model. The new 3.8-liter V6 motor is good for 205-horsepower and 15/18 mpg when paired with the 6-speed manual, which is only a 1 mpg increase over its predecessor (the TJ).

The 2008 and newer models of the Jeep Wrangler JK saw the availability of an optional four-speed automatic transmission. Either way, fuel economy is still rated at around 15/19 mpg but choosing the rear-wheel drive option will give you an additional 1 mpg in highway driving.

When the 2012 model came in the market, potential buyers were rejoicing when Chrysler announced a new 3.6-liter V6 with 285-horsepower and 260 pound-feet of torque. The six-speed manual came standard while a new five-speed automatic is optional. The 2012 Jeep Wrangler Unlimited with the automatic is good for 16/20 mpg while the manual can achieve 16/21 mpg. The hike in power means a better power-to-weight ratio and consequently better fuel economy as well. This trend will continue with newer models that net a combined fuel economy of 18 mpg whether equipped with the manual or automatic.

The Jeep Wrangler JL saw the light of day in 2018. It still has the familiar Pentastar V6 motor and standard six-speed manual which is now good for 17/23 mpg thanks to improved variable valve timing, increased compression ratio, new intake manifold, and injectors. Chrysler saw it fit to equip the new Wrangler with an optional 8-speed automatic as well. This enables the vehicle to churn out better fuel economy figures at 18/23 mpg.

But Chrysler has another ace up its sleeve for the Jeep Wrangler JL: the new turbocharged 2.0-liter four-cylinder motor. Combined with the new mild hybrid eTorque system and 8-speed automatic, it produces 270-horsepower and 295 pound-feet of torque. With the new turbo e-torque motor, the Wrangler JL is rated at around 17/25 mpg.

By modifying or changing the engine timing, automatic shift points, and the air/fuel ratio using an aftermarket tuner, you can modify the horsepower, torque, and fuel economy. This also holds true if bolting on a couple of go-fast engine mods. Modifying the CPU tuning will allow the mods to unleash the full potential of your Jeep.

Those who drive a 2007 to 2018 Jeep are familiar with the laggard throttle response. This is caused by a delay in the drive-by-wire throttle pedal. Stepping on the gas will send a signal from the pedal to the ECU. The ECU will then send the signal to the throttle body. Those two steps are responsible for the perceivable delay in throttle inputs. Installing a throttle response controller like the Pedal Commander Bluetooth will eliminate the pedal delay, improve acceleration and consequently can yield better fuel economy numbers.

The stock air intake system in your Jeep Wrangler is certainly adequate for daily driving. The main weakness in the OEM system is the paper filter. Using surface based filtration techniques, a paper filter is easier and faster to clog than a depth-based cotton filter. Thus staying on top of air filter maintenance is important in order to preserve regular fuel economy. For those who are looking to get a slight improvement in performance and possible fuel economy as well, consider an aftermarket intake with a depth-based high flow filter. These types of systems further reduce any restrictions in the intake tract and filter and ease the effort necessary for the engine to fill the combustion chamber.

There’s no doubt that Jeep Wranglers, lift kits, and aggressive mud tires go hand-in-hand. And while these mods will improve the rugged looks and off-road capabilities of your Jeep Wrangler, they will also contribute to poor fuel economy and a bumpy/noisy ride. If you’re really concerned about fuel economy, try installing a skinnier set of highway-terrain or H/T tires instead of all-terrain A/T or mud terrain M/T tires as the former will have a lower rolling resistance due to their streamlined tread profile. Lowering the Jeep to obtain a better aerodynamic profile could help as well, but to be quite frank, if you are thinking about doing this then you have definitely bought a Wrangler for all the wrong reasons.

Realistically speaking, this is the most effective method to return the best possible fuel mileage. Again, just due to the size, shape, and intended off-road purpose of a Wrangler, fuel economy is really a bit of an oxymoron. If your Jeep Wrangler is equipped with a manual tranny, try to shift as early as possible to get better fuel mileage. For both automatic and manual Wranglers, careful throttle application (avoid judicious input) is a big factor in achieving the best possible mileage.