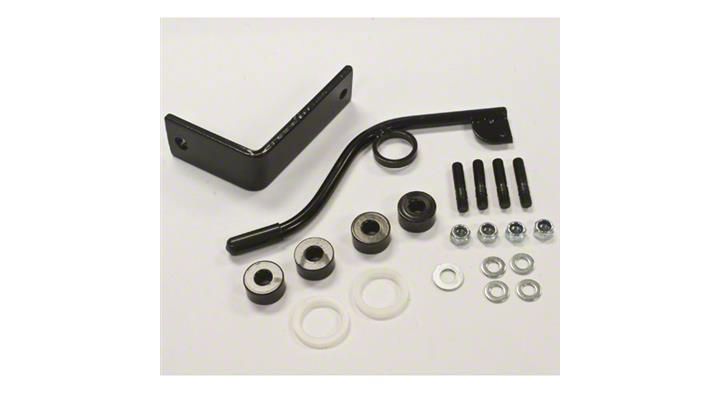 Step 2: In order to remove the seat from the riser you need to unhook the two cables on the inside of the seat. The bottom cable pulls off, the other cable may need to have some tension relieved on it in order to detach. You can do this by pushing the lever backwards. The driver side should only have a seat belt sensor wire that can be disconnect by unplugging it underneath the seat.

Step 3: Remove the cables from the cable bracket on the inside rear section on the passenger seat.

Step 4: Remove the female end seat belt and bracket from the rear inside of the seats. (Save the bolt, it will be used later)

Step 6: Remove the cable with the black end completely that you disconnected from the rear side bracket on the passenger side in Step 3.

Step 7: Re-route the other cable with the white end to the opposite side on the passenger side bracket. (from right to left side) (Fig A)

Step 8: Install the four 8mm threaded studs into the factory seat riser. (The short end of the stud goes into the riser) (Fig B) 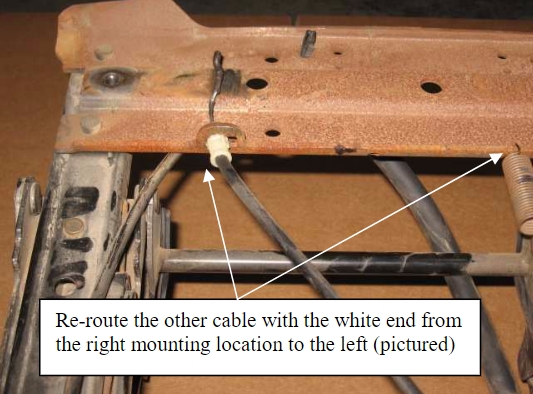 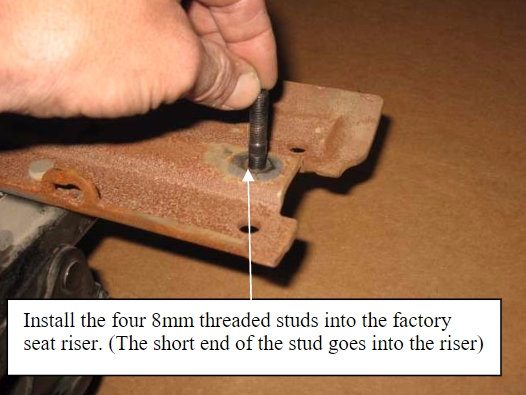 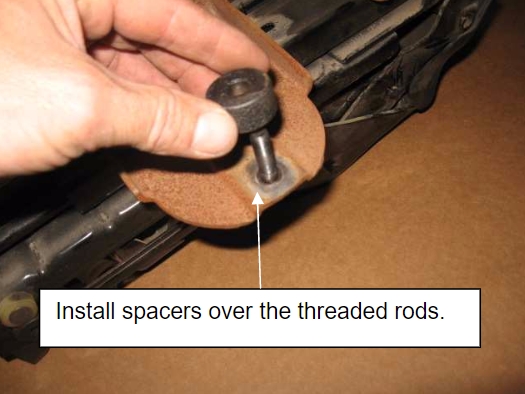 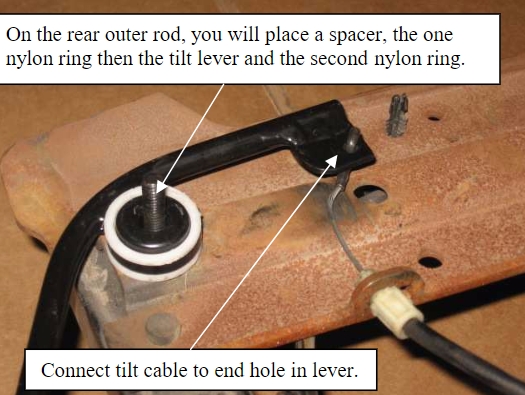 Note: If you are not using the factory seat belt, and instead some kind of harness, you can replace the seat belt bracket with another round spacer. 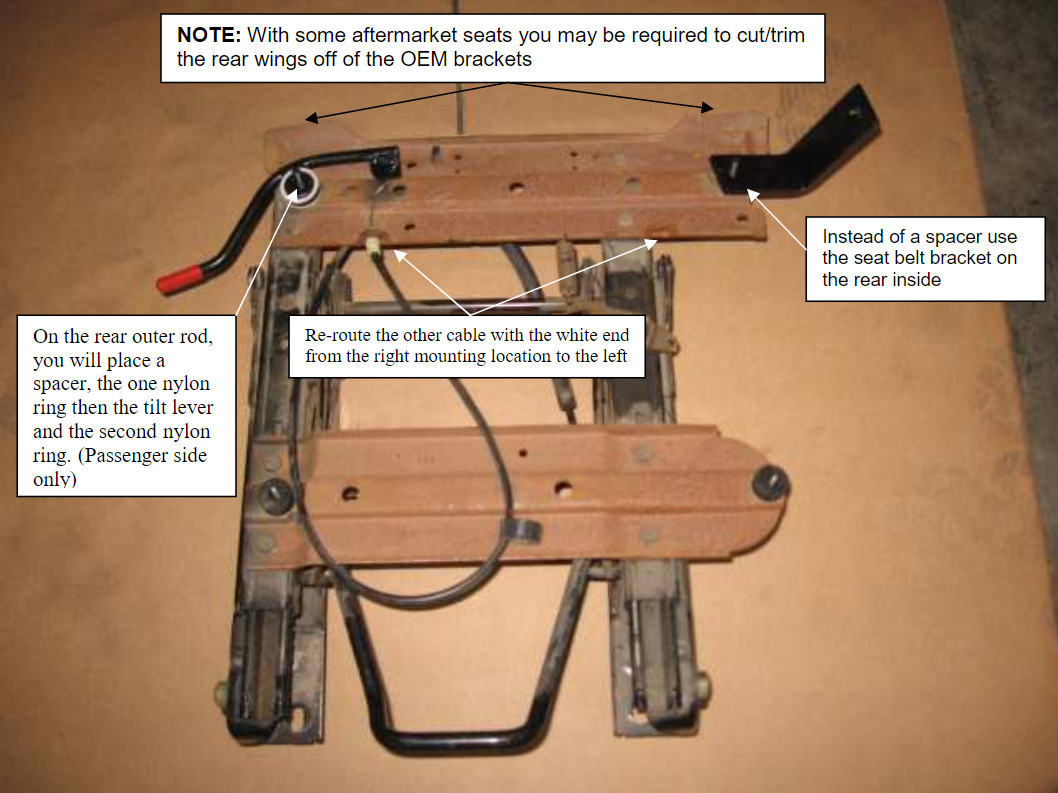 Step 10: Place seat on frame, lining up the holes/slots on the brackets on the bottom of the seat with the threaded rods. Secure with the included washers and nut. (Fig F)

Step 12: Install seat back in vehicle and secure with the previously removed hardware. Make sure all hardware is secure. Installation is now complete. 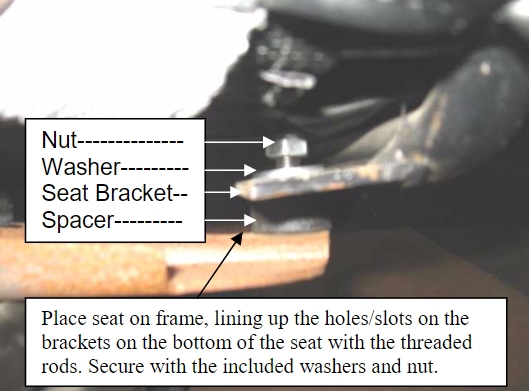 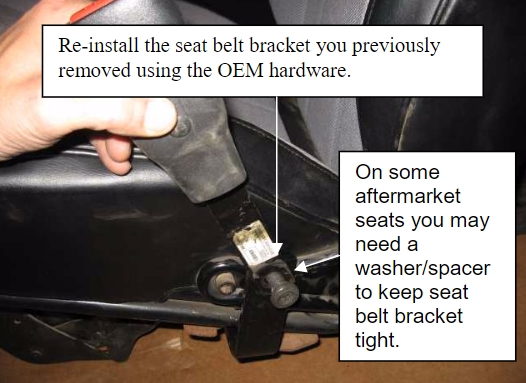 Smittybilt’s products are covered under the following limited warranties only. Note that the duration of the limited warranty differs according to the material and finish of the product purchased. Subject to the duration and conditions of the limited warranty stated below, Smittybilt warrants to the original retail purchaser that its products are free from defects in material and workmanship. All other warranties and representations express or implied, are hereby disclaimed, including fitness for merchantability and buyer’s intended use or purpose. All parts are sold “AS IS” except for the limited warranties granted herein. Buyer assumes all risks as to the selection, suitability and performance of all goods and products selected. This limited warranty does not cover damage or impairment in any part due to misuse, improper installation, accident or contact with on-road or off-road hazards, product modification, improper or inadequate cleaning and/or maintenance. Smittybilt is not responsible for items damaged during shipping. This warranty is not transferable from the original buyer. For the original Buyer to be eligible for the limited warranty coverage, the Buyer must provide proof of purchase. Smittybilt strongly recommends returning the warranty registration card.

Customer’s remedy hereunder shall be limited only to repair or replacement (at Smittybilt’s option) of any defective part(s) returned to Smittybilt at customer’s expense. The determination of whether or not a returned part is defective or subject to coverage under the limited warranties stated herein shall be made at Smittybilt’s sole discretion.

To assure product quality, Smittybilt reserves the right to change product design, material, specification and finishes without prior notice to customers. This limited warranty gives you specific legal rights and you may also have other rights, which may vary from state to state. Some states do not allow limitations on how long an implied warranty lasts, so the above limitations may not apply as to you. Also, some states do not allow the exclusion or limitation of incidental or consequential damages, so the above limitations or exclusions may not apply to you. Smittybilt reserves the right to discontinue product lines and substitute products, or provide other remedies than those listed in this limited warranty for those discontinued products.

Rollover and other types of vehicle accidents may result in serious injury or death to you, your passengers and others sharing the road. Smittybilt accessories are decorative and are not intended to reduce or avoid injury or damage in the event of an accident. The weight and location of Smittybilt accessories may affect your vehicles’ handling, stability and performance, creating an increased risk of accident or rollover. Before installing any accessory, check state laws and assure that the accessory will not obscure any lights or interfere with proper operation on your vehicle’s safety equipment. Consult your owner’s manual and the Smittybilt instructions, or additional safety information. Smittybilt products, nor the warnings contained herein, are not a substitute for your safe driving. Don’t drink and drive, always use seat belts and don’t drive faster than conditions permit.