All About the JL Wrangler & JL Sub-Models

Whether you're looking to add a little flair to your JL Wrangler or looking for a gift for a friend, there's a solution. Want to rock your Jeep pride? Take your pick from our collection of Jeep themed apparel. Need a new, stylish tire cover? We got those too.

The Jeep Wrangler is the original American off-road SUV. No matter the trim or year model, a Jeep Wrangler has always been a highly capable off-road vehicle. It possesses has an honest-to-goodness and rugged demeanor that never seems to go out of style. The newest 2018 Jeep Wrangler is the JL. The JL Wrangler is the fourth-generation model and is still using a rugged ladder-type full frame. It is longer, wider, and taller than previous models of the Jeep. But unlike the older Jeeps of yore, the new JL is considerably more refined. It is great as a daily driver, but it won’t back down when faced with rugged and mountainous terrain. 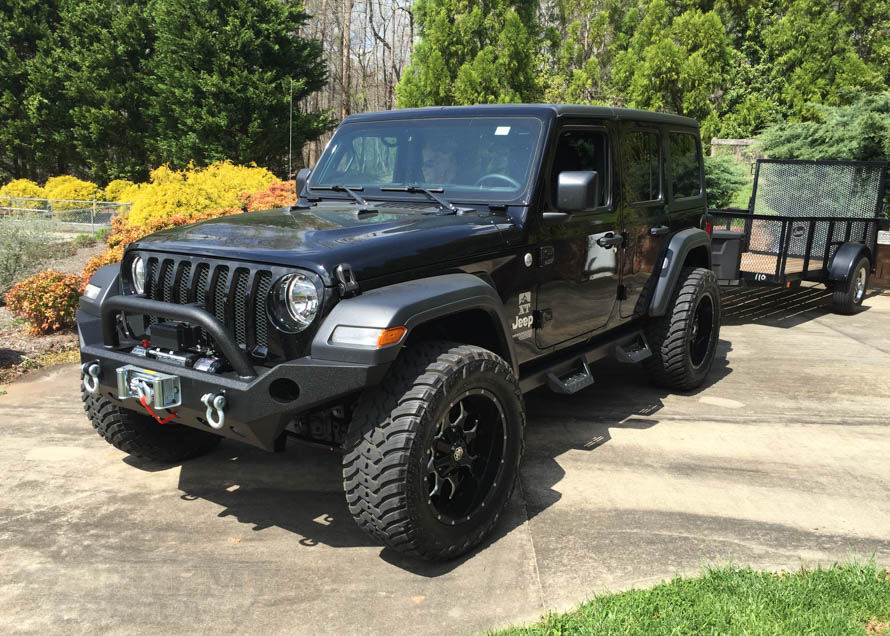 A Brief History of the Jeep Wrangler

For all intents and purposes, the original Jeep Wrangler YJ (manufactured in 1986-1995) is not a direct descendant of the WWII-era Willy’s CJ civilian Jeep. Although the CJ and the first-generation YJ Wrangler are both equipped with rigid live axles in the front and rear, flared fenders for added wheel clearance, a fold-flat windshield, and body-on-frame construction, the production Wrangler YJ is engineered to be safer and more comfortable in urban driving.

The YJ Wrangler is the first generation model. It came with leaf spring suspension and live rigid axles in the front and rear. It also features the trademarked rectangular headlights and part-time 4WD.

The TJ Wrangler is the second-generation Jeep which is sold in 1996-2006. It is the first production Jeep to be equipped with front coil springs from the factory. Furthermore, the Wrangler TJ came with the familiar round headlamps similar to the classic CJ Jeep.

The third-generation JK Wrangler was sold from 2006-2018. It is considered an all-new model even though it retained the familiar rugged styling of the TJ and YJ. The Wrangler JK came with upgraded and modern amenities to keep up with the competition.

The all-new 2018 Jeep Wrangler JL is the fourth-generation model. It may still look the same as the previous JK, but it is miles ahead in terms of refinement. And since the new JL is larger and longer than the JK, it also offers more room for passengers and cargo.

The First 5 JL Wrangler Mods You Should Do

Differences Between the Wrangler JK and JL

If parked next to each other, it is tricky to discern the differences between the previous model JK and new Wrangler JL. Although the new JL is bigger and wider (JL overall length: 2-door 166.8"; 4-door 188.4", overall width 73.8", overall height 73.6") than the JK, here are the telltale signs that you’re looking at the brand new Jeep Wrangler JL:

Which Jeep is Better? Our JL vs JK Comparison

The new Jeep Wrangler JL is still available in two-door and four-door body styles. Both configurations can be fitted with a hardtop or soft top. The standard engine is a 3.6-liter Pentastar V6 motor producing 285-horsepower at 6,400 RPM and 260 pound-feet of torque at 4,800 RPM. The3.6L V6 Pentastar uses an aluminum block (60 deg, V-type,) dual overhead cam design (chain driven) with a compression ratio of 11.3:1 and features sequential multiport fuel injection working with unleaded 87 octane fuel. This engine is mated to a D478 six-speed manual while an eight-speed 850RE automatic is optional. Fuel economy with the D478 6-speed is rated at 17/23/19 (city/highway/combined) whereas the automatic gets slightly better fuel economy at 18/23/20 miles per gallon, respectively.

You can also choose the new 2.0-liter turbocharged four-cylinder engine, which is optional across all trim levels. This hi-tech motor comes with a mild hybrid ​eTorque system to produce 270-horsepower and 295 pound-feet of torque with a combined EPA rating of 24 mpg. It is an all aluminum (block and heads) direct injection design that runs with a compression ratio of 10:01, capable of using unleaded 87 octane (however for best performance and fuel economy, Jeep recommends using 91 octane or higher). The smaller motor is equipped with a 48-volt starter-generator system, a 700 Amp maintenance-free battery pack, a delete alternator system, and a non-locking fuel filler cap. This motor is strictly mated to an eight-speed automatic.

Towing capacity for the 2018-2019 JL Wrangler is rated at 3500 lbs for all submodel, engine, transmission, and rear end drive ratio configurations.

The manual transmission available is an all-new D478 six-speed design with overdrive. It is synchronized in all forward gears and reverse and features a multi-rail shift system and a top-mounted shift lever. Rear end ratio with this transmission is 3.45 (standard) or a lower 3.73 is available as an option. This transmission is only paired with the 3.6L V6 engine. Wranglers that are equipped with the D478 6-speed have a Hill Assist mode that simplifies starting forward when on an incline.

The automatic transmission available is an 850RE electronic unit with 8 forward gears. Jeep has integrated an adaptive electronic controller with Electronic Range Select, which is a driver-interactive manual control mode. Power transfer is controlled via an electronically modulated torque converter clutch. 3.45 is the standard rear end gear ratio with this transmission.

Jeep has integrated 3 different transfer cases into the new JL, dependent on trim model. The NV241 'Command-Trac' is a part-time shift-on-the-fly transfer case operating in 2WD high, 4WD high, Neutral and 4WD low. It features a low range ratio of 2.72:1. This transfer case is standard equipment on Sport and Sahara trim levels.

Next is the NV241OR 'Rock-Trac' transfer case. Intended exclusively for the Rubicon, this is a part-time shift-on-the-fly transfer case with 2WD, 4WD high, neutral and 4WD low. Low range is very low (good for crawling!) with a 4.0:1 ratio.

Suspension wise, Sport models utilize gas-charged twin-tube shock absorbers with MTV (multi-tuned valve) technology for both front and rear. Brakes are powered-assisted (with ABS) and use a 12.9x.94-inch vented rotor in the front and a 12.9x.47 solid rotor in the rear. The front caliper is a 48 mm twin-piston floating design whereas the rear is a single 45 mm piston floating caliper.

Next up is the Sport S and comes with (on top of everything above) new polished 17-inch alloy wheels, automatic headlights, air conditioning (which is optional in the 2-door version of the base JL Sport), power locks with power windows, power heated mirrors and a leather steering wheel.

On the standard tires, approach angle becomes  41.4 degrees and ground clearance increases marginally to 10 inches. Departure angle remains unchanged. Like its lower trim Sport brother, the Sahara uses the NV241 Command-Trac transfer case but can be optioned with the MP3022 Selec-Trac transfer case instead.

The shock absorbers on Sahara models are upgraded to a high-pressure gas-charged monotube type with MTV technology. The brakes also get an upgrade to a thicker 12.9x1.1-inch rotor in the front and a 13.4x.55-inch disc in the back. Calipers are bigger as well, with the front still a twin-piston design with larger 51 mm pistons and the rear upgraded to a 44 mm single piston caliper.

The Rubicon is the one to choose for rock crawling and wilder off-road adventures. The JL Rubicon comes with 17-inch alloys with off-road LT285/70R17 BF Goodrich KO2 all-terrain tires, an improved Dana M210 front and M220 rear axle with shorter 4.10 gearing and electronic front and rear locking differentials, 4.0:1 low-range gearing, and an electrically-operated front disconnecting sway bar. Further pushing the off-road style is a set of black heavy duty rock rails that is part of the standard Rubicon package.

Ground clearance for this model is 10.8 inches with an approach angle of 44 degrees for a 2-door and  43.9 degrees for 4-door Rubicon trim models. Departure angle is rated at 37 degrees for both 2 and 4-door models. Rubicon models exclusively use an NV241OR Rock-Trac transfer case.

Rubicon models get another shock absorber upgraded, also using a high-pressure gas charged monotube shock absorber with MTV technology and an additional hydraulic rebound stop. Brakes are the same as the Sahara edition.

The interior of Rubicon models get an upgraded 7-in Uconnect 4 infotainment system alongside a one year trial-subscription of SiriusXM Satellite Radio, dual-zone climate control, premium cloth seats, and an integrated universal garage door opener.