Deflecting the Bugs and Rain with Tacoma Bug & Window Visors

A bug deflector is a simple modification, but effective at keeping your Tacoma free of bug guts and carcasses. Rather than smacking into your hood's paint, the deflector does exactly that. Window visors, on the other hand, are perfect for drizzly days when you want to keep the windows cracked open.

Bug deflectors and window visors are simple accessories that make your Toyota Tacoma more functional. They protect your vehicle from on the road hazards and allow you to be more comfortable, while also adding some personal style. Let’s go into a more in-depth discussion of these accessories. 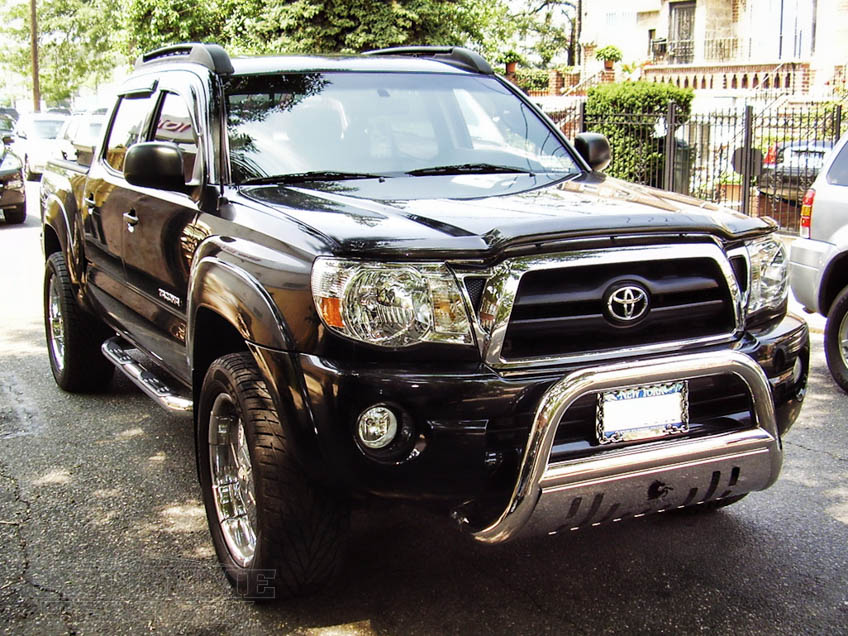 What are Bug Deflectors & Rain Visors?

A bug deflector is a semi-upright, contoured piece of material that is attached to the leading edge of the hood. It is designed to protect the hood, as well as to keep airflow moving over the windshield of the vehicle.

Rain visors are molded and contoured pieces that attach to the top edge of each window of your Tacoma’s doors. They are designed to keep rain out when the window is opened slightly, or to ventilate the interior of the car while parked.

They keep dust out while off-road with the window open slightly, and allow smoke to escape the interior while smoking, without having to open the window fully.

The Benefits of Having Both for Your Tacoma

Having a bug deflector will protect the front of your Tacoma’s hood from having dead bugs accumulate and possibly damage to your paint. It will also protect the hood from stone chips and small dings.

Leaving the windows cracked without fear of weather intruding facilitates lower interior temperatures and less odors from the heat of the sun. Additionally, because the visors are usually made of a tinted or solid material, they block some bright sunlight and allow for better vision near the edges of the windshield and the tops of the side windows.

Both of these devices also enhance the appearance of your vehicle. They give a mild custom appearance when installed and will help to set you apart from other Tacomas on the road.

Bug deflectors can be made of a few different materials. Deflectors made of ABS thermoplastic are the lowest profile. They are usually offered in a painted-to-match your vehicle color, or a chrome finish. Modified acrylic visors have a medium profile and are the most common. They come in a variety of colors, from clear to dark smoke, as well as painted with various designs. They are also available in chrome.

Most window visors are made of ABS thermoplastic or modified acrylic. They offer flexibility and UV resistance.

Visors are available in colors ranging from clear to dark smoke, as well as chrome and paint-matched colors. It is worth mentioning that visors for some older vehicles are also available in polished stainless steel.

Slim profile deflectors sit close to the Tacoma’s hood and are contoured closely to the shape of the hood. These deflectors offer great looks and an almost OEM appearance.

They deflect air slightly upwards, helping to reduce the impact of smaller bugs and stones. They typically only extend as far as the edge of the hood. Full length, high profile bug deflectors are spaced further away from the hood than the low-profile design. They curve back and upward further and direct the airflow upward further. This is helpful to direct larger bugs and stones away from your hood and windshield.

These deflectors usually extend all the way from one edge of the vehicle to the other.
Depending on vehicle model and brand/model of bug shield, there are two different ways to mount your bug deflector: tape on and bolt on.

In Channel Designs Versus Tape-On Designs

On the flip side, in-channel visors can require bending and significant force to lock them into the channel. One must be careful while doing this as the visors can break. Some consumers have reported that after time, in channel visors can loosen, rattle, and even fall out completely. Routine inspection of your Tacoma’s visors is recommended.

Tape-on visors are incredibly easy to install. Simply clean the vehicle’s surface with the included alcohol wipes, pull off the backing of the 3M foam tape, verify alignment, and stick the visor onto the vehicle. Because they rest outside the window, they provide a larger area of protection around the outside of the window. They also do not contact the window, so there is no risk of damage to the visor or the window when opening and closing the window.

Tape-on visors also have some negative points to mention. They are not easily removeable, and if removed or broken, they will leave behind adhesive residue. This can be a downright pain to remove. Also, because the mounting flange adheres to the outside of the window frame, they have a bulkier, less low-profile appearance.

To install the in-channel type window visors, adhere to the following steps: