Lighting Up Your Jeep Wrangler from the Inside

Simple upgrades like an LED map light are largely unappreciated until the upgrade's done. Lost on a trail in the middle of the night? Rather than rooting around for a decent flashlight, having crisp, clear interior lighting will make map reading and hunting around your interior that much easier. LED lighting also provides a clean look to your interior rather than the hazy yellow of halogens.

Whether it’s for aesthetic purposes or to add some visibility to your interior, a set of new LED replacement bulbs or accent strips can give you that added bonus you need. Forget that harsh yellow light of old incandescent bulbs and install a new multicolor LED retrofit to give your Wrangler the style it deserves. Bring some color changing strips to your Wrangler or just a much more comfortable light for those long drives at night with a set of aftermarket interior lights. While interior lights won’t totally pimp your ride, one simple interior light upgrade could make your Wrangler go from plain to popping. See what upgrades are available for your Wrangler. 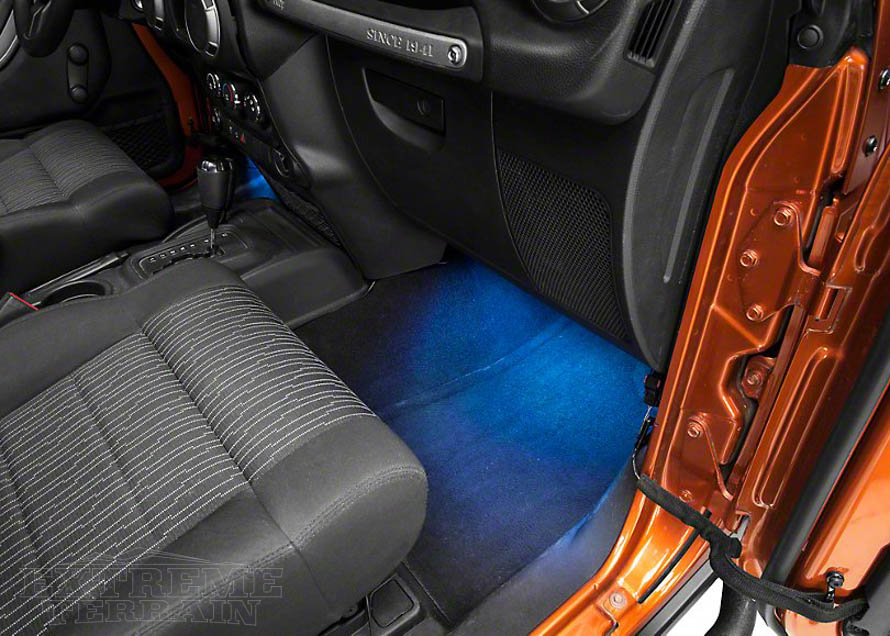 Chart of interior light bulbs for each generation of Jeep Wrangler:

Benefits of LED Lights for your Jeep Wrangler

If you’re looking to add more visibility and a cleaner light to your interior, then LED lights are the best on the market. Composed of a light emitting diode and thin rod filament, LED bulbs require very little power to operate.

Many Jeepers are surprised to hear how easy and inexpensive it is to replace existing bulbs with an aftermarket LED dome light. Even a retrofit of an older or YJ or TJ model is relatively inexpensive and worth it for the added visibility.

For those who are more interested in the aesthetic aspect of LED interior lights, accents strips (which we’ll discuss later) and lighted aftermarket switches add that little bit of extra suave you’re looking for.

For extra accessorizing, there are aftermarket LED light switches for your integrated media panel (YJ and TJ Wranglers), console stick, and dashboard. With a variety of colors to choose from, LED replacements add extra customization to your Wrangler, as well as added visibility.

Installation for your console LED lights are relatively simple. Simply unscrew and detach the panel and connect your LED bulbs to their respective fuses.

Again, replacing your interior dome lights is relatively easy. For older vehicles, you may need a phillips screw head to replace the lens to get to the bulb. For newer Wranglers, you can simply use a flat head screw to wedge it against the corner of the lens and acquire enough leverage to lightly crank it open.

Replace the old bulb with a new one and take the time to clean your Light covers. Remove any smudges that obstruct visibility and consider investing in an LED bulb for an even cleaner and brighter light.

Rear cargo lights and additional overhead installations can add even more visibility in the darkest of places. Whether you’ve dropped a precious item or are doing an aftermarket installation to your interior, having that extra visibility pays off.

LED Accent Strips: What are They?

For that added aura and style to your Wrangler, we offer LED accent strips for your car door, rear cargo area, and dashboard. Accent strips are a low power, LED light source that come in a variety of colors and shades. Some are even color changing.

Choose from vibrant red or a neon green to brighten up your vehicle and impress everyone who steps inside. While not the most utilitarian upgrade, it certainly impresses. Besides, as a Wrangler owner, we know you’re already familiar with having nice things.

Finally, to install an LED light switch, you’ll need to connect to a 12V power source. Typically, this could be found in your Wrangler’s cigarette lighter. Although, this may need to be hardwired in newer Wranglers. Some power sources include:

Find your spot and turn off the fuse box. While the vehicle is off, solder the connection wire of your LED accent strip to your power source and test their electrical connection.

You will need a crimping tool if hardwiring is required. Finally ground to the metal body of your vehicle using a screw.

Kits should come with instructions for attachment to the interior of your vehicle. You can usually use velcro, glue, or even zip ties to firmly attach LED light strips to the dashboard, rear, or side of your Wrangler.