Supercharges are a great upgrade to add to your wrangler's build. The additional power will allow you to keep your big rig's performance and add additional confidence taking on challenging trails.

Jeep owners don’t often think of speed and quick acceleration when they think of their Wrangler. More often than not, Jeeps are often thought of as slow vehicles with the aerodynamics of a brick. Supercharges, on the other hand, have always been thought of as a modification done to sports cars with the sole purpose of faster acceleration and more power. The two perceptions explain the confusion when discussing superchargers on Jeeps. In this information guide we’ll explain the general function of a supercharger, the difference between a supercharger and a turbo, benefits of a supercharger on a Jeep (both on and off-road), fuel and other requirements needed to run a supercharger on your Jeep, effects on other components, and finally the 0-60 performance and who should and should not install a supercharger on their Wrangler. 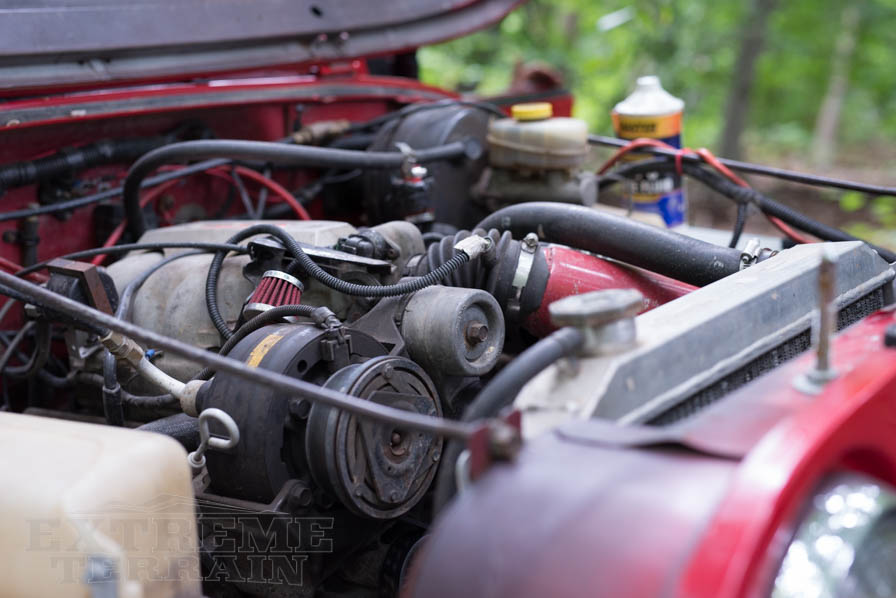 What is a Supercharger?

Benefits of a Jeep supercharger:

Negatives of a supercharger: 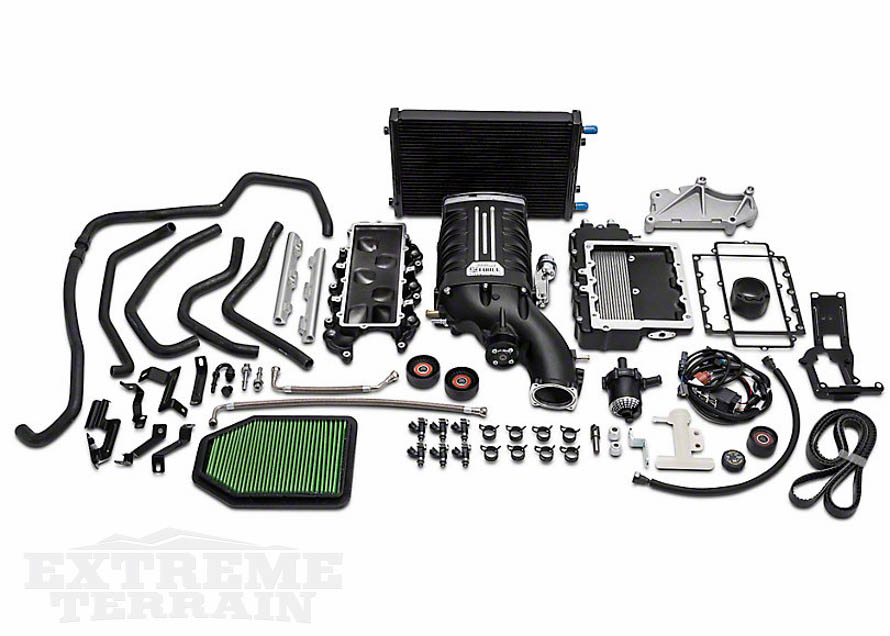 What’s the Difference Between a Supercharger and a Turbo?

Both modifications provide more air to the engine. A turbo is spooled through exhaust gases and superchargers utilize the engine belt. As a result, the turbo needs to wait for the driver to accelerate the engine in order to produce pressure in the exhaust and feed the turbo. This, in turn, produces a small delay which is called turbo lag. Superchargers are belt driven and provide an immediate supply of air in correlation with the engine as it’s accelerated, producing air for combustion almost instantly and in-line with the engine for a more consistent level of power.

Benefits of a Supercharger On and Off-Road

Current Wrangler models come equipped with a 3.6L six-cylinder Pentastar engine that produces 285 horsepower which is a substantial amount of power, but given that some four-door models weigh close to 5,000-pounds, the Pentastar engine barely maintains the demand on a stock Jeep. Once a lift and larger tires are introduced, the acceleration and overall engine performance quickly diminish and a noticeable lag is problematic on steep inclines. A supercharger’s ability to produce immediate power will have a dramatic impact in overall acceleration and power and help solve most of the power deficiencies due to weight and tire mass. 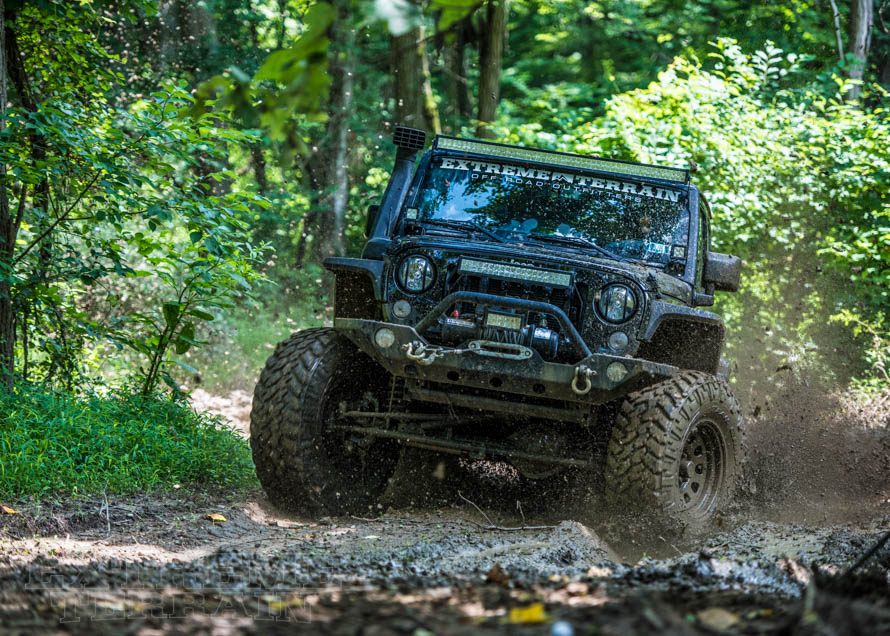 Fuel and Other Requirements Needed to Run a Supercharger

One of the keys to reliable increases in overall engine performance is fuel and proper management. Often higher octane fuels have minimal performance benefits on a stock Jeep. However, once a supercharger is installed, there is more of a demand in overall fuel consumption, but also the quality and fuel octane. In order to maximize the fuel combustion, fuel quality and timing is critical.
Tuners are hardware recalibration tools that will update the fuel mapping of the Jeep, ensuring the correct amount of fuel is introduced in accordance with the substantial amount of air that comes through the intake on a Jeep equipped with a supercharger. The balance of fuel to air ratio must be correctly calibrated to ensure the most optimal level of performance.
Considering heat build-up is one of the major downfalls of a supercharger, most kits will come equipped with a separate coolant pump, intercooler, and hoses, all designed to properly cool down the supercharger during demanding conditions.

Effects on Other Components

It’s understandable a substantial increase in power and overall engine performance will have an impact on other important components of the Jeep’s drivetrain. One of the primary concerns are the front and rear driveshafts. The increase in overall torque can easily damage these components if power is delivered too quickly in driveline binding situations. In addition, transfer case gearing can be susceptible to damage of prolong exposure to quick off-the-line full-throttle acceleration.

In addition, to help prevent poor fuel economy, some supercharger kits come equipped with actuators that release built-up pressure during coasting or long steady acceleration. This allows the supercharger to free-spin and has no affect on the Jeep’s engine or the fuel economy. During heavy acceleration, the actuators close and allow the supercharger to function as designed and provide the increased airflow and additional power. The actuator design relives undue stress on the rest of the engine’s drivetrain during low-demand situations.

Systems like the Edelbrock E-Force supercharger for the current 3.6L Pentastar engines can run 8.5 pounds of boost and pass 50-state emissions while providing your Jeep with 317 horsepower and 277 ft./lb. of torque which is a substantial increase in power for a naturally aspirated engine. In addition, 0-60 times greatly improve from an estimated 8.4 seconds from the factory to a range between 6.2 to 6.6 seconds, depending on the supercharger.

Aside from the increase in 0-60 times, one of the most noticeable difference is full power in lower RPMs. In an effort to improve overall fuel economy, the factory Pentastar engine will provide about 75% of the total open throttle during lower RPMs. Most supercharger kits provide 100% of the power for the full RPM range.

In conclusion, there’s no doubt superchargers are an expensive modification, with most kits costing over five thousand dollars. In addition, the installation can be complex and require the help of an experienced mechanic that could quickly increase the price of the overall investment. Superchargers are ideally suited for Jeep owners who are prepared to invest a substantial amount of money into their Jeep. Typically, these owners will be running a lift and larger tires which rob the Jeep of acceleration and overall engine performance. Superchargers are an efficient and reliable source of power for those situations while still providing a comfortable and consistent driving experience.