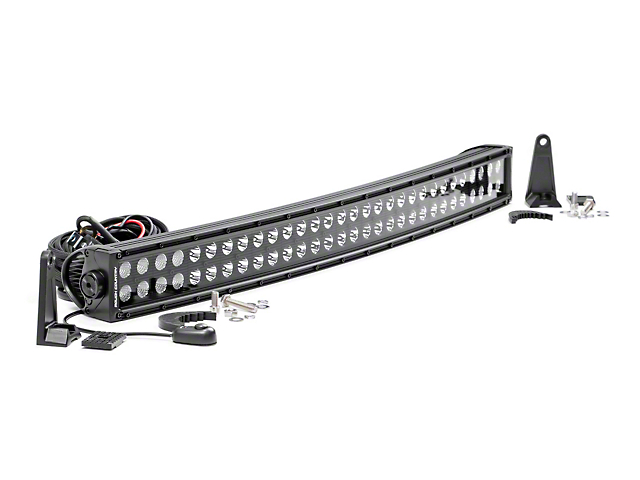 FREE Shipping
Out of Stock
Sorry, please enter a valid US or CA postal code
We're sorry, zip can't be updated at this time.

Choose options to add to cart.
Add to Cart
Close X
Enter Your Email to Save Products.
In Stock
View Open Box Items
Save for later
Create a list
Add to New List

Built to Shine. If you are looking for a light bar that will deliver bold and bright light for all your off-road adventures, then look no further than the Rough Country 30 Inch Chrome Series Curved Dual Row LED Light Bar - Flood/Spot Combo. This progressive, curved design delivers a wider coverage area, enhancing the flood/spot combo beam pattern for dense environments.

Exceptional Engineering. Crafted from a durable, die-cast aluminum, this light bar housing boasts a brilliant chrome finish as well as an IP67 waterproof rating. Resistant to rust and corrosion, you won’t have to deal with unwanted damage from the elements. In addition, the noise reducing technology eliminates that pesky harmonic hum as well as wind resistance racket for a flawless performance.

Installation. This intermediate install can be completed in approximately 3 hours with basic garage tools. For installation conveniences, this light bar comes with a wiring harness, toggle switch, and installation hardware.

Warranty. Any defect found as a result of faulty manufacturing will be covered in full with Rough Country’s 3-year limited warranty.

Reviews of Rough Country Lights products have an average rating of 4.6 out of 5